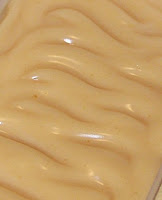 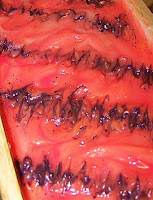 Because of my issue with not being able to pick up the honey notes, I added a fragrance to this batch, reduced water and found that the scent actually helped to induce trace. It went into the mold at a medium-thick trace, since I had to work faster to get the two colors incorporated.
Actually I need to make a few more honey batches and do my best to put down the color and the fragrances. I'm most looking forward to the milk and honey version, but I'm intrigued by what could happen if I increase the amount of honey in each batch. Since honey and sugars will add heat, I have to be careful to avoid it in excess to keep the soap from turning into a volcano or cracking.
There are several variations to try. Depending on how testing results go, we could be adding honey soaps into our line. These batches will go through a national sampling. We'll analyze the results and then submit to a more strident field of testers before anything will appear on our shelves.
So here's to honey and what could be an interesting road ahead.
Posted by Scented at 12:01 PM 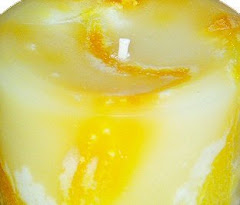 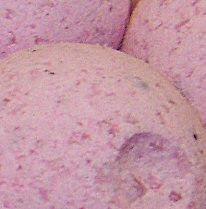 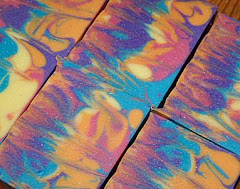